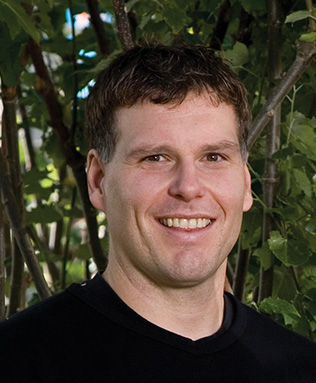 The American Association for the Advancement of Science (AAAS), the world’s largest general scientific society and publisher of the Science family of journals, has elected Dr. Shawn Mansfield to the newest class of AAAS Fellows, among the most distinct honours within the global scientific community.

In the section of Agriculture, Food & Renewable Resources, Dr. Mansfield, Professor, Faculty of Forestry, and Fellow of the Royal Society of Canada, is recognized by AAAS for ‘distinguished contributions to plant science spanning industrially relevant lignocellulosic processing to research on fundamental molecular mechanisms/genetics of cell wall deposition, carbohydrate allocation, and cellulose and lignin biosynthesis.’

“I am honoured by this peer recognition,” said Dr. Mansfield, “And I am thankful to my collaborators and, most importantly, the many outstanding graduate students and post-doctoral fellows over the years who have made this possible.”

“On behalf of UBC Faculty of Forestry, I would like to extend our sincerest congratulations to Dr. Mansfield on the recent announcement of his AAAS fellowship,” said Dr. Robert Kozak, Dean, Faculty of Forestry. “His research and work in plant science and tree biotechnology has led to significant innovations, both in science and industry, and continues to garner widespread attention globally.”

Prof. Andrew Szeri, Provost and Vice-President, Academic, UBC Vancouver, said, “I want to share congratulations, from my office and from UBC, to Dr. Mansfield for this recognition of his accomplishments and contributions to research and scientific discovery.”

“AAAS is proud to bestow the honour of AAAS Fellow to some of today’s brightest minds who are integral to forging our path into the future,” said Dr. Sudip Parikh, AAAS chief executive officer and executive publisher of the Science family of journals. “We celebrate these distinguished individuals for their invaluable contributions to the scientific enterprise.”

The 2021 class of AAAS Fellows includes 564 scientists, engineers, and innovators spanning 24 scientific disciplines who are being recognized for their scientifically and socially distinguished achievements. AAAS Fellows are a distinguished cadre of scientists, engineers, and innovators who have been recognized for their achievements across disciplines ranging from research, teaching, and technology, to administration in academia, industry, and government, to excellence in communicating and interpreting science to the public.

The new Fellows will receive an official certificate and a gold and blue rosette pin to commemorate their election (representing science and engineering, respectively) and will be celebrated later this year during an in-person gathering when it is feasible from a public health and safety perspective. The new class will also be featured in the AAAS News & Notes section of Science in January 2022.