The UBC Faculty of Medicine’s Djavad Mowafaghian Centre for Brain Health (DMCBH) is leading a strategic effort to increase our understanding of the brain and neurological and mental health diseases. 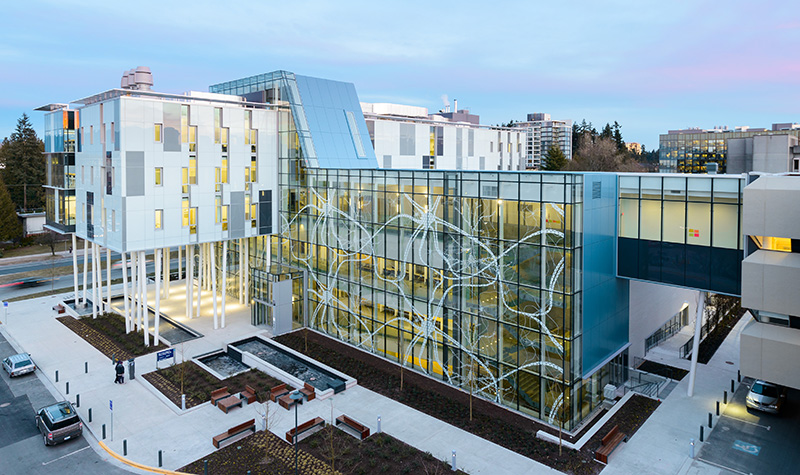 The Centre for Brain Health aims to build upon the strengths in our research environment by integrating the most promising areas of fundamental and early translational research at UBC, including advances in the following complementary areas: neuroinflammation, synaptic function and brain circuitry, and the linkages with brain imaging.

These key areas of research will create transformational impact by advancing our understanding of the brain in health and disease, while also suggesting novel targets and biomarkers for clinical trials. Insights into rational therapies for treating neurodegeneration and other diseases of the brain, including mental health, are a likely result from transformational research into these complementary areas.

The ultimate goal of this research cluster is to translate these novel approaches into the clinic in the form of new therapies, identify novel biomarkers to test the effects of such therapies, pinpoint populations at increased risk of future neurological and psychiatric disease, and bridge links and rapidly mobilize through collaborations between basic biomedical and clinical research programs.

Collectively, this goal will have a significant impact by providing a better quality of life for patients through targeted therapies and early detection, ultimately contributing to decreased healthcare costs due to effective management of brain illnesses.

Dr. Sophia Frangou has commenced her appointment as the UBC President's Excellence Chair in Brain Health, joining the university as a Professor in the Department of Psychiatry.

An internationally-prominent clinician scientist, Dr. Frangou's research focuses on uncovering pathophysiological processes underlying psychosis, with emphasis on schizophrenia and bipolar disorder using clinical, genetic, cognitive, and neuroimaging techniques. In 2002, Dr. Frangou published a comprehensive review of the significant and persistent cognitive impairment observed in bipolar disorder, a work which has been acknowledged as heralding a major shift in how the field viewed cognitive deficits and their clinical ramifications. More recently, in investigating the neural pathways associated with disease expression, risk and resilience in bipolar disorder, Dr. Frangou introduced the concept of resilient adaptation, providing a new avenue for future studies into the biological mechanisms for resilience and prevention of disease expression in bipolar disorder. Her current research investigates the pathological mechanism underpinning psychosis, and the mechanisms translating genetic risk to clinical phenotypes, in order to improve treatment through the specification of causative biological pathways.

Dr. Frangou holds a medical degree from the University of Athens Medical School, as well as a Master's Degree in Neuroscience and a PhD in Psychiatry, both from the University of London. She previously trained as a psychiatry resident at Maudsley and Bethlem Royal Hospitals in London, and in 2005, obtained her Certificate of Completion of Specialist Training in Psychiatry and entry onto the Specialist Register maintained by the General Medical Council in the United Kingdom. Dr. Frangou has been a Professor of Psychiatry in the Department of Psychiatry at the Icahn School of Medicine at Mount Sinai in New York since 2013, and prior to this, she held the post of Reader (equivalent to Professor) at the Institute of Psychiatry, King’s College, London, from 2002 to 2013.